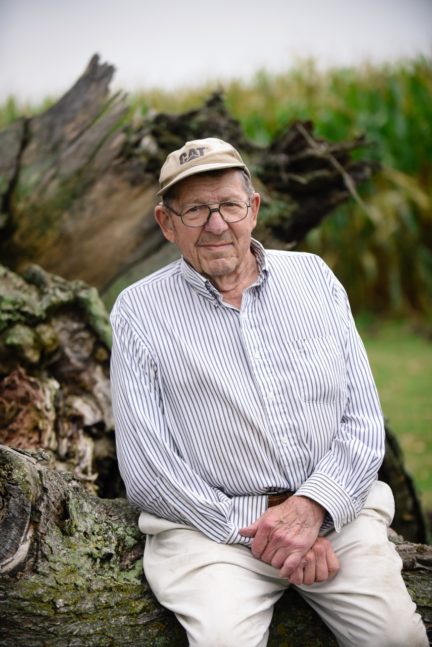 Edwin Lee Strauss was born on October 9, 1927 in Monroe, Wisconsin to Lee and Hazel (Williams) Strauss. His family moved to Polo, Illinois when Ed was in 8th grade, and he was a proud graduate of Polo Community High School. Ed was drafted into the army straight out of high school in the spring of 1945 where he specialized in Russian cryptology and would joke that, “there were a lot more letters in the Russian alphabet.” He was stationed in Virginia at a base that was disguised as a dairy farm and later at a base in California disguised as a sheep farm. Little did he know this would foreshadow what was later to come.

After his service ended, Ed returned to Polo and began to work at the White Pines (aka Lingg) Cheese Factory making Swiss cheese among other things with his Uncle Vincent and father Lee Strauss. Ed met his future wife Joan McCleary after she and a couple of her girlfriends stole his new 1953 Pontiac Catalina and took it joyriding. This move really got his attention and so their courtship began. He would work at the cheese factory during the day and then help Joan with her family farm at night. Edwin and Joan married on October 2, 1954, at her parent’s farm in Polo, Illinois. Ed began to farm full time with Joan and would freely admit that, “Joan taught me everything that I needed to know about farming.” As newlyweds, Ed and Joan lived in the converted schoolhouse located on the north east corner of the farm until they purchased their current homestead just across the road in Ogle County.

Ed loved the farm, working the land, and raising livestock with his best friend Joan. He had interesting views on life and would sometimes “preach a sermon” to the livestock that he was attempting to corral. Ed enjoyed playing cards with friends and family and would take special joy in beating his grandchildren in Euchre. He loved Gorilla tape and used it to fix anything from clothing to a hydraulic reservoir on the John Deere mower (it worked!). Because he had a tendency to disregard the safety warnings affixed to any power tool or ladder, these items had to be moved to undisclosed locations. Of special importance were the extended visits from his #1 daughter who would accompany him to the casinos. Ever the optimist when it came to gambling, Ed loved to play the lottery. Additionally, he also enjoyed nearly winning the Publishers Clearing House on a yearly basis.

A consummate farmer and life-long learner, Ed read the WSJ daily but he didn’t miss an episode of “Ancient Aliens.” (Is the moon real or just an alien spaceship?) A bit of a mad scientist, one of his many “experiments” included placing twine around the laundry basket to make wearable handles. (Ingenious!) Twine or bailing wire often played a pivotal role in his farmer fixes. Although he also swore he didn’t like chocolate and sweets that much, his dentist might offer a different opinion.

Most Friday nights, Ed could be found dining at the Pinecricker with his family. He always had a positive attitude and would put a smile on the faces of anyone that knew him. He was a loving father, devoted husband, and will be missed dearly.

A visitation will be Thursday, June 24, from 5:00 to 7:00 p.m. at the Polo Family Funeral Home, 110 E Dixon St, Polo. A private graveside service will be held where he will be laid to rest next to his wife Joan in Fairmount Cemetery.

In lieu of flowers, a memorial will be dedicated in Ed’s name to the Shriners Hospital for Children.