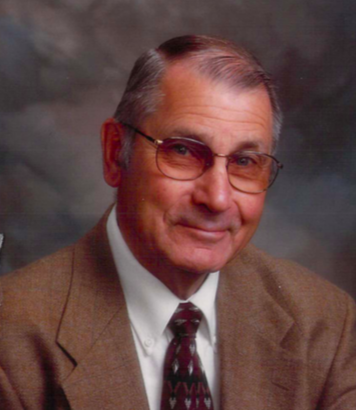 Wilbur Loren Bowman, 88, of Polo, passed away on Monday, October 8, at Pinecrest Terrace in Mt. Morris, surrounded by his loving family.  Born September 13, 1930 in Middlebury, IN, Wilbur was the oldest of six children of Noble and Ethel (Eisenhour) Bowman.  He married the love of his life, Evelyn Jean Wales, on December 31, 1950 in Polo.  Wilbur was an Electrical Engineer by trade, and started Bowman’s Electric in 1968, which he was involved with until his retirement in 2011.

A proud Dad, Grandpa, and Great Grandpa, Wilbur was the anchor of his family. He enjoyed making apple cider and sharing his love of music and life.
For many years, Wilbur was an active member of the Association of Soil and Water Conservation Districts, and a member of the Polo and Illinois State School Boards. Along with his wife Evelyn, Wilbur volunteered throughout the country in disaster response efforts through the Church of the Brethren. Wilbur held a longstanding position as choir director at the Polo Church of the Brethren and many community choirs. He was also a Ride Captain and flag support vehicle for the Illinois Patriot Guard Riders.
He is survived by his wife Evelyn; daughter Stephanie (Fred) Schmidt and daughter-in-law Joann (Greg) Bowman; sons Jeff (Annette) Bowman; Rod (Cathy) Bowman and Mike (Kimberly) Bowman; sisters Berniece (Byron) Douma and Janice Bizzari; brothers Walter (Anna) Bowman, Clair (Barbara) Bowman and Ron (Susan) Bowman; seventeen (17) grandchildren and twelve (12) great-grandchildren
He is preceded in death by son Greg Bowman, daughter-in-law Annette Bowman, grandson Timothy Bowman, and sister-in-law Barbara Bowman.
Visitation will be held on Friday, 4:00-6:00 p.m., at the Polo Family Funeral Home, 110 E. Dixon St., Polo, IL.  Services will be held on Saturday, 10:00 a.m., at the Church of the Brethren in Polo.  Burial will immediately follow at Fairmount Cemetery in Polo.
Memorials may be directed to the Good Samaritan Fund with Pinecrest Manor.