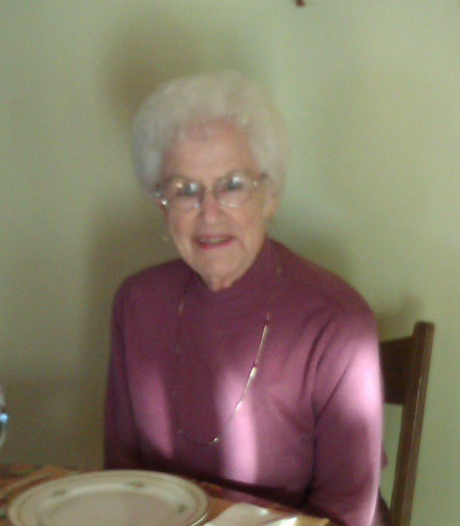 Alberta C. Cripe, age 90, died peacefully on Monday, December 28, 2015 at Heritage Square in Dixon, IL. Alberta was born in Dixon in 1925, the daughter of Frederick and Florence (Anderson) Swanlund. After graduating from Dixon High School in 1943, she worked at Green River Ordnance Plant near Amboy and was our own “Rosie the Riveter.” She married Robert Cripe, Sr. on Nov. 30, 1946.

She was able to live on her beloved farm north of Polo from 1950 until the last few months of her life. She was active in Ogle County Home Extension, served as the secretary for Brookville Township for many years, and also volunteered as a tutor at Centennial Elementary School in Polo.

Alberta excelled at and enjoyed doing many things with her hands. She loved to search for antiques and often re-finished them. She was an excellent seamstress who could sew anything from lovely clothing for her daughters to beautiful quilts. She was a talented gardener and cook (who always found something at fault with anything she cooked!), and baked some of the best Christmas sugar cookies in the Western hemisphere.

Alberta was preceded in death by her parents, her brother Clifford, her son Robert Jr., and two sons-in-law, Rich (Mary) Crawford and Larry (Jean) Irwin.

The family would like to thank the following for their outstanding care and compassion: the staff at Heritage Square, Serenity Hospice & Home, Pinecrest Manor, as well as KSB and CGH Hospitals.

A Memorial Service will be held Monday, January 4, 2016 at the Brookville Methodist Church. Visitation 10am – 11am with the service following at 11am. Burial will be at a later date.