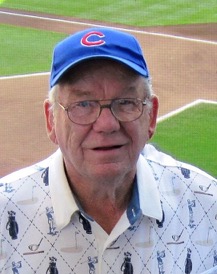 Polo – Kenneth C. Obendorf, 90 of Polo passed peacefully away at his home on Wednesday, April 28th 2021, with his loving wife of 70 years by his side. Kenneth was born May 7th, 1930 in Carroll County, the son of Arthur and Nellie Waterbury Obendorf. Kenneth graduated from Polo Community High School in 1948. He married Elizabeth Isley on February 17th, 1951 at St. Mark’s Lutheran Church in Polo, IL.

Kenneth was the owner of Obendorf Shelling in Eagle Point, a business started by his father in 1930. He eventually purchased Hazelhurst Lumber and Grain and remained a part of the business until he later retired. He enjoyed spending time with his friends in different breakfast groups, golfing, and playing cards. Kenneth was an avid Cub’s fan, attended many Cubs games and celebrated their 2016 World Series win with his family and friends. He was on the committee for LSSI Bid for Youth Auction of Ogle County, a council member for St. Mark’s Lutheran Church, on the board for Polo Historical Society, and was awarded 2006 Citizen of the Year for Polo and Republican of the Year for Ogle County. He volunteered for Representative Jerry Mitchell. Kenneth enjoyed pulling the train full of his grandkids and their friends at local parades.